We seem to hear more and more about the intergenerational gap and mental health problems among the elderly in recent years. And while moving into a residential care home can provide the elderly with valuable opportunities to socialise, even this is sometimes not enough to prevent depression.

Luckily, increased attention to the problem is leading to the development of innovative solutions. One of the most notable is this blog post’s topic: a programme in the Netherlands that has seen Dutch students living in nursing homes.

At worst, these processes create vicious circles. As young people socialise more and more in and through the internet, the old are less likely to encounter them. And the elderly in turn are less likely to socialise when doing so requires a level of tech literacy that they don’t have.

There is, of course, a simple solution to this: people of different generations should spend more time together.

But making this happen is more complicated. It’s not enough to ask old or young people to get out of their comfort zones on their own. For a number of years now Deventer-based residential home company Humanitas has had a solution. They offer free rent to young people studying at university; all the young people have to do in return is dedicate 30 hours each month to socialise with elderly residents. This includes showing them how to use email and social media, playing games and simply talking.

There is a reason why Humanitas Deventer’s solution is so elegant: it creates space for interactions across the intergenerational gap, and does so by directly addressing one of the biggest concerns among young people: high living costs.

Depression and Loneliness in the Elderly

Society is better now at talking about mental health problems than it has ever been, but far too many still suffer in silence. In fact, according to a survey by charity Age UK, as many as one in five UK citizens deals with depression and the numbers only worsen later in life, with more than half of adults aged 55 and over reporting some form of mental health problem.

A look at risk factors for mental health problems can help explain this. The following have all been linked to higher likelihood of depression:

Many of the causes listed above have one thing in common: loneliness. This is supported by research, with Age UK reporting that 72% say that more opportunities to connect with others would help overcome depression in the elderly, and Exeter University lecturer Johanna Harris citing research showing that reducing social isolation improves elderly patients’ wellbeing and life expectancy.

Of course, none of this will be surprising to anyone who has spent time with elderly people. We all have a friend or a relative who has become increasingly sadder or reserved with fewer people to talk to. But identifying loneliness as the problem also opens ways for us to help fix it. By simply engaging with the elderly more, we can make a serious improvement to their lives.

The results of the Humanitas Deventer scheme show that hopes for intergenerational friendship are not in vain. Get old and young people to interact and they pretty quickly find they have a lot in common. Jurrien Mentink, one of the six students living at Humanitas in 2017, put this clearly: “living and working together with the elderly residents”, he says, is one of the things that makes him happiest. And despite “different priorities”, he firmly believes that “my neighbours are happier than they used to be” too.

Happy side effects are also notable, with benefits including cultural exchange between generations. While it is widely acknowledged that it is more difficult for older people to discuss mental health problems, bringing them together with young people enables them to benefit from what Age UK director Caroline Abrahams calls “a cultural revolution in our willingness to be open about mental ill health”.

Bridging the Generation Gap at Westgate

Westgate is already developing its own practices to help bridge the intergenerational gap, from primary school visits to shared harvest celebrations. You only need to see the size of the smiles on the faces of young and old alike to see how beneficial initiatives like this are for the community. 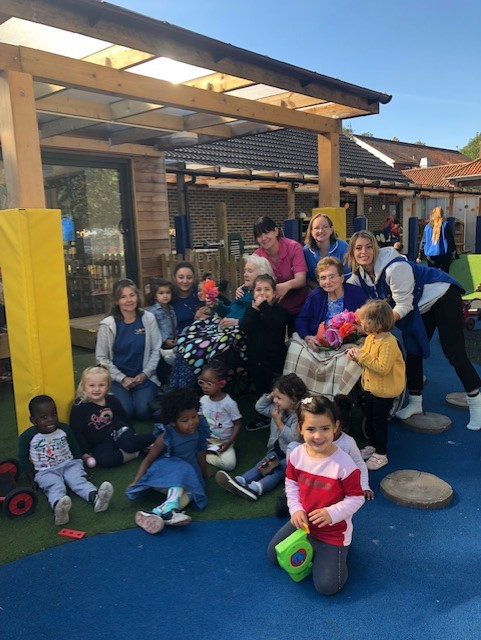 It is crucial that societies can look after their most vulnerable, and that the old and young can all feel a part of the same community. With projects like Humanitas Deventer’s, ordinary people can gain valuable experience helping and connecting with each other. In Humanitas’s own words, relationships across generations can be “deep and meaningful”, giving both sides “a great deal of positivity and support”.